32,664 undocumented migrants have been whipped after they were found guilty under the Immigration Act 1959/63.

32,664 whipped under the Immigration Act would be the undocumented migrants.

Malaysia's 6P Program (a registration and amnesty program) ended on or about 10/1/2013 - but alas we still hear of such registration exercises conducted by private entities, apparently with the approval of the police, immigration, etc.. In all likelihood, these are 'scams' - but migrant workers very easily can be deceived into believing that they have not become documented migrant workers - free from the possibility of arrest, detention, whipping, etc..

Most of them were punished for violating the Immigration Act, most likely entering Malaysia without valid entry permits.

KUALA LUMPUR: As many as 35,000 foreigners have been whipped by Malaysian law enforcement agents in local prisons from 2005 to Sept 10 this year.

This was revealed by Home Minister Hishammuddin Hussein in a parliamentary written response to PKR-Kelana Jaya MP Loh Gwo Burne.

He said that according to Prisons Department records, a total of 32,664 (93.3%) foreigners have been whipped after they were found guilty under the Immigration Act 1959/63.

Hishammuddin added that the whipping of foreign offenders under the Immigration Act was a measure enforced only from 2005 onwards.

Section 6(1) of the Act states that foreigners cannot enter the country unless they have valid entry permits or passes, endorsements or exemptions.

Hishammuddin’s answer did not explain where most of those whipped came from.

Meanwhile, a parliamentary written response by Minister in the Prime Minister’s Department Nazri Abdul Aziz showed that RM85.7 million had been spent by the Federal Special Task Force (FSTF) in nabbing illegals found in Sabah since 1990.

Responding to a query by Independent-Tuaran MP Wilfred Mojilip Bumburing, he said that these expenses were broken down into RM13.3 million for arrests, RM51.4 million for detention and RM21.05 million for expulsions. - FMT News, 1/11/2012, 35,000 foreigners whipped since 2005

(1) No person other than a citizen shall enter Malaysia unless -


(a) he is in possession of a valid Entry Permit lawfully issued to him under section 10;

(b) his name is endorsed upon a valid Entry Permit in accordance with section 12, and he is in the company of the holder of the Permit;

(c) he is in possession of a valid Pass lawfully issued to him to enter Malaysia; or

(d) he is exempted from this section by an order made under section 55.

(2) (Repealed).
(3) Any person who contravenes subsection (1) shall be guilty of an offence and shall, on conviction, be liable to a fine not exceeding ten thousand ringgit or to imprisonment for a term not exceeding five years or to both, and shall also be liable to whipping of not more than six strokes.

(4) The burden of proof that a person entered Malaysia without contravening subsection (1) shall lie upon that person, and in any prosecution for an offence under subsection (1), it shall not be necessary to specify in the charge the date, time, place or manner of the entry of such person into Malaysia, or by means of travel used for such entry, and such prosecution may be held at any place in Malaysia.

BUT then, there was this document addressed to undocumented migrants to come for a Briefing and Registration on 26/1/2013 - telling them that they will get copies of personal identification papers that will keep them safe from action by local authorities...

One such questionable invite to get 'legalized', which I managed to get hold is as follows - the forms the migrants who attended were asked to fill up apparently all apparently looked very official as though from the Immigration Department but I wonder - for this happens after the 6P program had ended 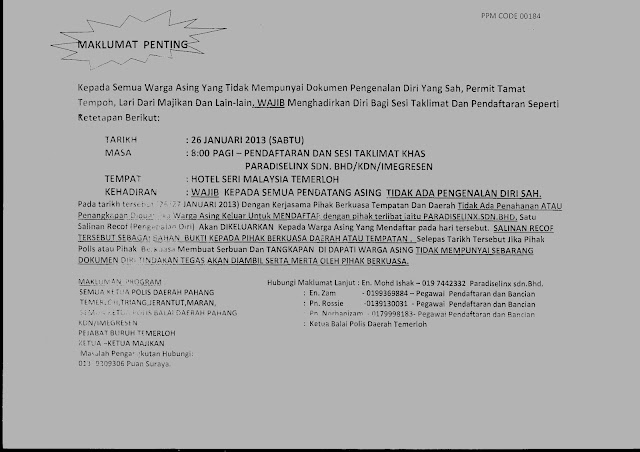 Posted by Charles Hector at 8:52 PM No comments:

When rights are violated, we should not be blaming workers from claiming (fighting) for their rights - but sadly the Media generally portray workers in the bad light. Peaceful protests and actions generally receive no or very little media attention - whilst when matters allegedly get 'violent'. The use of the word 'striking' , and sometimes 'rioting' rather than peaceful protest, protest or picket shows the prejudice of some media and their reporters.

Interesting is that this report talk about 2 worker actions, many of whom are unaware about..

August 16, 2010
"...more than 5,000 migrant workers, which also included hundreds of Nepalis employed at JCY Co Ltd, an electronics factory in the Tebrau Industrial area of Johor Bahru, protested near the workers´ quarters over reported negligence by their employer when a fellow Nepali worker died of high fever while at work. The incident took place on August 16, 2010, when the employer was alleged to have prevented him from being taken to the hospital in time..."

Muar case was a worker action where they were claiming Minimum Wages that they should have been receiving since January 2013 - Maybe the reporter should have seen what had really happened, rather than just quoting what this Korean said.

Workers do claim their rights peacefully to their employers ...and usually do start picketing when all their demands go unanswered - in some cases, even when they do lodge complaints at Labour Departments, the employer response is to terminate... see also STOP PENALIZING WORKERS WHO WANT TO GET JUSTICE - MAXTER GLOVE SHOULD REINSTATE BURMESE MIGRANT WORKER WHO COMPLAINED TO LABOUR DEPARTMENT

Workers have always come together as workers to claim rights


Choon´s concerns came a day after the Nepali media was flooded with news about a clash between two groups of Nepalis involving local gangs in the southern Malaysian city Johor Bahru that left three Nepalis injured on Sunday.

"Their [workers´] protests some times are not intended for their professional rights but targeted for political interests. It has created problems at a time when Nepal is one of the priority countries for South Korea to source workers," Choon, who came to Nepal to inspect the newly opened Korean language exam center in Lalitpur, said.

The Malaysian police arrested nine Nepalis suspected to have been involved in the incident and later filed cases against them at the local court.

Keeping in view the possible backlash to the event, the Nepali embassy in Kuala Lumpur had to publicly urge Nepalis in Malaysia to stay calm.

"We urge all Nepali brothers and sisters to continue their work with restraint and not to get involved in any provocative activities," the embassy said in a statement that day.

A couple of days before that, the Malaysian police had filed charges of criminal offence against 19 Nepalis for being involved in vandalism in Maur, Malaysia demanding salary hike.

Protest activities by Nepali workers go further. About 600 Nepali migrants employed in Maxter Glove Manufacturing Company in Perak of Kelang Neru near Kuala Lumpur resorted to striking in September 2012 demanding better food and accommodations. The action brought the company’s operations to a standstill for three days.

In another case of violent protest, more than 5,000 migrant workers, which also included hundreds of Nepalis employed at JCY Co Ltd, an electronics factory in the Tebrau Industrial area of Johor Bahru, protested near the workers´ quarters over reported negligence by their employer when a fellow Nepali worker died of high fever while at work. The incident took place on August 16, 2010, when the employer was alleged to have prevented him from being taken to the hospital in time.

These incidents are sufficient to show how Nepali workers are turning more violent in labor destinations in recent days.

South Korea, which had put Nepal as the best source country in 2010 for a well-managed process for sending workers, is now showing concern over some of the cases of protests and ‘unethical behavior’ shown by Nepalis against their employers.

Malaysia, which has sourced security guards exclusively from Nepal, is still the most popular destination for Nepalis. But, the recent incidents have tarnished Nepali workers’ image as loyal and disciplined.

"It is a very serious issue that the trend of Nepalis being involved in violent protests in the labor destinations putting forward demands that can be resolved through negotiation. Such acts will create a negative feeling toward Nepalis in overseas employers’ mind," Bal Bahadur Tamang, the president of Nepal Association of Foreign Employment Agencies (NAFEA) says.

Tamang says Nepali workers, who are still known for loyalty, will be tagged as strikers in recipient countries.

"We have had reports of Nepali workers turning violent even in Gulf countries where laws strictly prohibit industrial protests. Worse, incidents of clashes between Nepali groups have worried us much," says Tamang.

However, not all the cases where Nepali workers have been involved are they on the wrong side.

"We shouldn´t undermine their genuine demands. But we have to be more serious about the emerging trend of Nepalis resorting to protests defying the law of land in destination countries," Tamang adds.

Nepal has been receiving remittance worth around Rs 400 billion annually from Nepali migrants in the overseas markets, making its contribution to the economy as much as one-fourth of the total Gross Domestic Product (GDP).

Remittance, which is also the key source of foreign currency earning at a time when country´s exports are slowing, will be badly affected if labor destinations, reacting to violent acts, cut their demand for Nepali workers.

Though strikes, industrial closure, protests, picketing and manhandling of employers by workers have become common in Nepal, such acts are not accepted by the law in most of the host countries.

With the international labor market starting to increasingly show more preference for skilled workers, the situation for Nepalis who are mainly unskilled labor is becoming tougher.

Resorting to impractical protests, workers are risking their own jobs whilst found to be spending a lot of money that they borrow from local money lenders at predatory interest rates.

They have the responsibility to financially support their dependent family members back home.

But why are they involved in such protests challenging the law of the land?

Foreign employment expert Dr Ganesh Gurung says such acts in labor markets by Nepali migrants is the products of the frequent bandas, strikes and other forms of violent protests that they experience back home in Nepal before they leave for overseas jobs.

"Most of the workers, who are working in overseas labor markets, lived through the major political movements during the last three decades besides hundreds of strikes and bandas. They are practicing what they learnt in Nepal," Gurung, who has also visited a number of places where Nepalis are working in Malaysia, says.

Gurung says that job-seekers should be given pre-departure orientation about their rights and responsibilities as worker in the foreign labor destinations to make them more disciplined and avert such incidents in the coming days.Published on 2013-03-29 08:00:05 - Republica, 29/3/2013, Violence by Nepali workers hurting overseas job prospects

Posted by Charles Hector at 12:55 AM No comments: