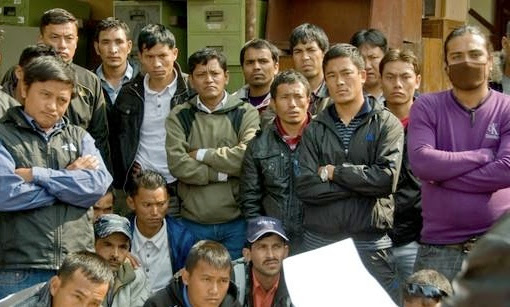 Nepali migrant workers in Malaysia are looking forward to the 13th general elections with the hope that their circumstances may be addressed with a new government.
There are almost a million Nepali migrant workers in Malaysia, currently plying their skills in various sectors.
Citizen Journalists Malaysia recently spoke to some Nepalese on their expectations on the May 5th polling.

Malaysian based Nepali labour leader, Sundar Aale Magar reckoned that, just like millions of Malaysians, he is equally excited about the Sunday election. “Malaysia looks like a beautiful bride with the decoration of poster, banners and other materials of promotion,” said Sundar.

He also added that the excitement in this election is different from the past elections and I wish the whole democracy process to be a great success.”

Sundar hopes that the in coming government would for once, give importance to migrant workers.

“We want us to be treated with dignity and provide some security for us,” said Sundar.

According to Sundar, currently they have to pay high amount for medical treatment.

“We would be glad if the government helps us with an affordable medical treatments and end the provision of deducting levy from workers salary,” added Sundar. “Our wish is that the income of immigrant’s workers in Malaysia should be enough to live a quality life and they should have equal and ample opportunities to develop their career,” said Kumar.

Kumar also stressed that the workplace should be safe and secure for the migrant workers to work.

Up to January 2012, almost 2000 Nepali workers have been reported dead and most of it are due to industrial accidents and work related issues.

“We want to form our union so that we can talk about our work and labour freely. We want our voice to be heard,” said Kumar.

Nepal literary figure, Shreejhan Shree feels that the new minimum wage, which has been set by the previous government, has not come into effect yet.

Following that, the new government should look into ways of implementing the minimum wage effectively.

He also said that the new government should eliminate the levy and hostel charges imposed by the employers.

Furthermore, the Nepali workers currently serving prison sentence must also be deported back without conditions.

Nepali labourer, Yam Bahadur said that the new government must start recognizing that there are skilled Nepali workers that come and work in Malaysia.

“We don’t get jobs according to our ability and skills. Everyone gets same kind of labourer job,” he said.

“Everyone comes here as a labourer but there should be provisions where employee asks the worker about their skills and ability and allocate job accordingly,”

According to remittance worker Shiva Subedi, migrant workers are equally excited about the election and hopes that the new government will step forward to solve the problems of the migrant workers.

“The workers feeling insecure and want a new policy to address the problem,” said Shiva.

For the past 10 years, Malaysia has been the main destination for Nepalese workers.

Even though, there’s close to one million Nepalese working here, Nepal and Malaysia are far away from a labour agreement.